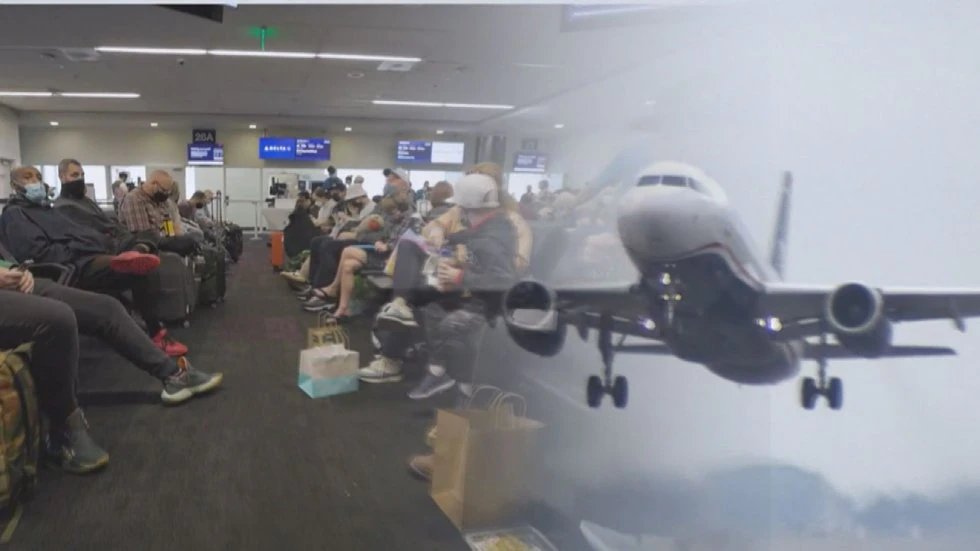 CHESTERFIELD, Va. (WWBT) – Major airlines all over the country have been canceling hundreds of flights a day, citing pilot shortages after encouraging many pilots to retire early during the pandemic while underestimating the demand during recovery. So far, over 300 airports nationwide are now offering fewer flights.

One hundred eighty-eight airports have lost more than 25% of their flights. At least nine airports no longer have any flights coming or going. It’s estimated that the airline industry will be short some 12,000 pilots by next year.

But former airline pilot and CEO of the Richmond Executive Aviation Flight School (REA) Captain Mark Hackett says this problem was propagated after a reduction and pay and pensions industry-wide following 9/11.

“Pilot pay and benefits were reduced after 9/11. Pensions and 401k plans were disrupted during bankruptcy court. Pilot pay was actually cut in half as the airlines were struggling to survive, and it really diminished the pilot training pool from Sept. 11, 2001, onto today,” Hackett said.

Hackett says barriers to entry in the aviation field have also limited the pool of available qualified pilots and how quickly they can become certified.

“We’re also experiencing a shortage because it costs a lot of money to become a professional pilot. You have to have a lot of training, you have to have FAA certification, and now since 2009, you have 1,500 hours of flight time to qualify as an airline transport pilot,” Hackett said. “We’re seeing a reduction of airline pilots that can fill those seats today.”

Before 2009, the training hours required for new pilots were just 350. Hackett says while the safety requirements have significantly improved across the industry, it also means it takes longer for pilots to become certified, which is why maintaining a robust training and hiring pool is crucial for the health of the aviation industry.

“Due to that fast-paced recovery, you can’t just snap your fingers and have a pilot go from you’re hired to you’re in the seat,” Hackett said. “It takes time. These pilots that we train here at Richmond Executive Aviation must have 1,500 hours of flight experience before they even qualify for the airlines, and that takes years to do.”

Hackett says despite the pandemic hitting the airline industry hard, it also slowed the demand for pilots. During that time, airlines reduced the number of pilots they were training, betting that recovery after the pandemic would take much longer.

“The airlines were struggling to maintain during the pandemic, so they stopped their hiring cycles, they stopped their pilot pools, and their search for qualified pilots,” Hackett said. “The airlines, to save resources, did not put many resources into getting those qualified candidates into the seats fast enough, and now that the industry is recovering much quicker than anticipated, the pilot shortage is starting to rear its ugly head again.”

There is also a requirement by the Federal Aviation Administration (FAA) – that airline pilots must retire once they reach the age of 65. Hackett says that the age requirement was increased from 60 in 2007, which bought the industry time up to the pandemic.

“Had the pandemic not happened, airline companies would have experienced the airline pilot shortage we’re seeing now much earlier,” Hackett said. “You can’t fly planes without pilots, and you can’t have safety unless those pilots are highly qualified.”

The Air Line Pilots Association (ALPA), which represents the largest union of pilots in the world, says there have been 8,000 newly certified pilots in the past year, and that poor planning from airlines’ filling positions is to blame.

“Some airlines are trying to distract from their profit-first business decisions to cut service with the fictitious claim that there is a lack of available pilots,” the union said in a press release.

“ALPA is prepared to collaborate with anyone who comes to the table, in good faith, and work together to help our industry navigate this challenging period. However, we will not allow anyone to exploit this current moment to divert attention away from their mismanagement of the pandemic relief while attempting to weaken aviation safety,” ALPA president Capt. Joe DePete said.

Hackett says many issues plaguing the airline industry today come down to pay. He says there are over 250,000 qualified pilots nationwide but approximately 85,000 airline jobs. Despite the surplus, he says many pilots are not rushing to fill the gaps in the airline industry because of concerns about their quality of life while working.

“That’s where we are today,” Hackett said. “You’re going to cancel hundreds of flights, and no airline or aircraft is exempt from having a pilot on board.”

Hackett says he’s not in favor of reducing the training hours required to become certified. Still, he believes in improving the quality of the training to prepare pilots for the technology and equipment they’ll be using in state-of-the-art planes of today.

“Whether you’re flying a smaller plane, or a commercial jet, or a corporate jet aircraft, the pilot qualifications to fly passengers is roughly the same,” Hackett said. “It’s not a quick overnight fix, and because of that problem, we’re seeing the hurt today with the lack of pilots. Training protocols have to change.”

He says the benefit of REA is that he’s training his pilots on the technology they’ll be using in the field rather than on antiquated planes, which he says not only prepares future pilots for what they will be operating at an airline but also could qualify the pilots quicker. Hackett says this can’t be the only issue addressed to resolve the pilot shortage.

“The biggest problem is we have to fix the pilot quality of life and pilot pay. We need to safeguard the industry as far as safety goes, and we can’t reduce those minimum hours for certification just to get the youngest pilots on the books that are willing to fly for less, which is what companies want to do,” Hackett said.

Hackett says there is also a need for more flight schools to train the next generation of pilots to meet the demand of airlines in the future, but he says local governments can make services like that difficult to establish.

“We also have to get more flight schools open; flight schools are busting at the seams,” Hackett said. “It was very difficult to open our flight school. We got a lot of discontinuity with the County of Chesterfield and still do to this day.”

Even if these solutions were put in place today, Hackett says that consumers should expect the impacts from the shortage to last far beyond summer.

“It’s not tomorrow, it’s not the end of the summer – we’re in trouble,” Hackett said. “As a matter of fact, this is the tip of the iceberg. This is going to get much, much worse. We’re talking about 10 to 15 years before we see an industry adjust training protocols and pilots.”