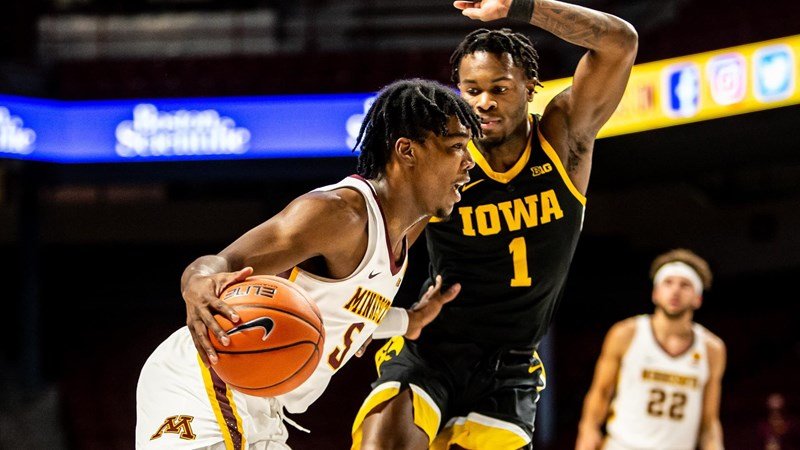 • For the second time since Christmas night, the Minnesota Golden Gophers and the Iowa Hawkeyes face each other, this time in Iowa City, Iowa. The Golden Gophers hold a 39-53 all-time record at Iowa, excluding vacated games.

• Minnesota handed Iowa’s lone Big Ten loss of the season on Christmas night when the Gophers earned a 102-95 overtime win against the Hawkeyes. Brandon Johnson made all four his 3-point attempts in overtime and finished with 26 points and nine rebounds. Marcus Carr had 30 points on 6-for-13 shooting from 3-point range and eight assists, and Liam Robbins added 18 points and four blocks for the Gophers. Carr also hit the game-tying three-pointer to send it into overtime. He as later named the Big Ten Player of the Week.

• Minnesota fell to No. 10 Michigan, 82-57, Wednesday night in Ann Arbor, Mich. Marcus Carr led the Gophers with 14 points in the loss. The Gophers and Wolverines will tangle again after the Iowa game, Jan. 16 at Williams Arena.

• Marcus Carr was named to the John R. Wooden Award Midseason Top 25 Watch List Wednesday. Chosen by a poll of national college basketball experts based on their performances during the 2020-21 season thus far, the list comprises 25 student-athletes who are front-runners for the sport’s most prestigious honor. Carr is one of 12 guards on the list and is one of six student-athletes from the Big Ten to be recognized. Carr has scored in double figures in all 13 games this year and he has three 30-point games and six 20-point games this season. He averages 21.5 ppg which ranks third in the league and 18th nationally. In the Big Ten, Carr ranks first in assists per game (5.6) and minutes per game (35.8).

• Liam Robbins is averaging 2.7 blocked shots per game. That average tops the Big Ten and ranks 16th nationally. He also is third nationally in total blocks at 35. Robbins’ game high this season has been five, done three times, while his career-high is seven when he played at Drake.

• Since beginning the season, Minnesota has its longest break in between games with the Gophers’ next action coming on Jan 16 when the Michigan Wolverines come to town.

• Tip off is set for 1 p.m., on ESPN2 while KFAN 100.3 FM will carry the Gopher Radio Network broadcast in the Twin Cities.