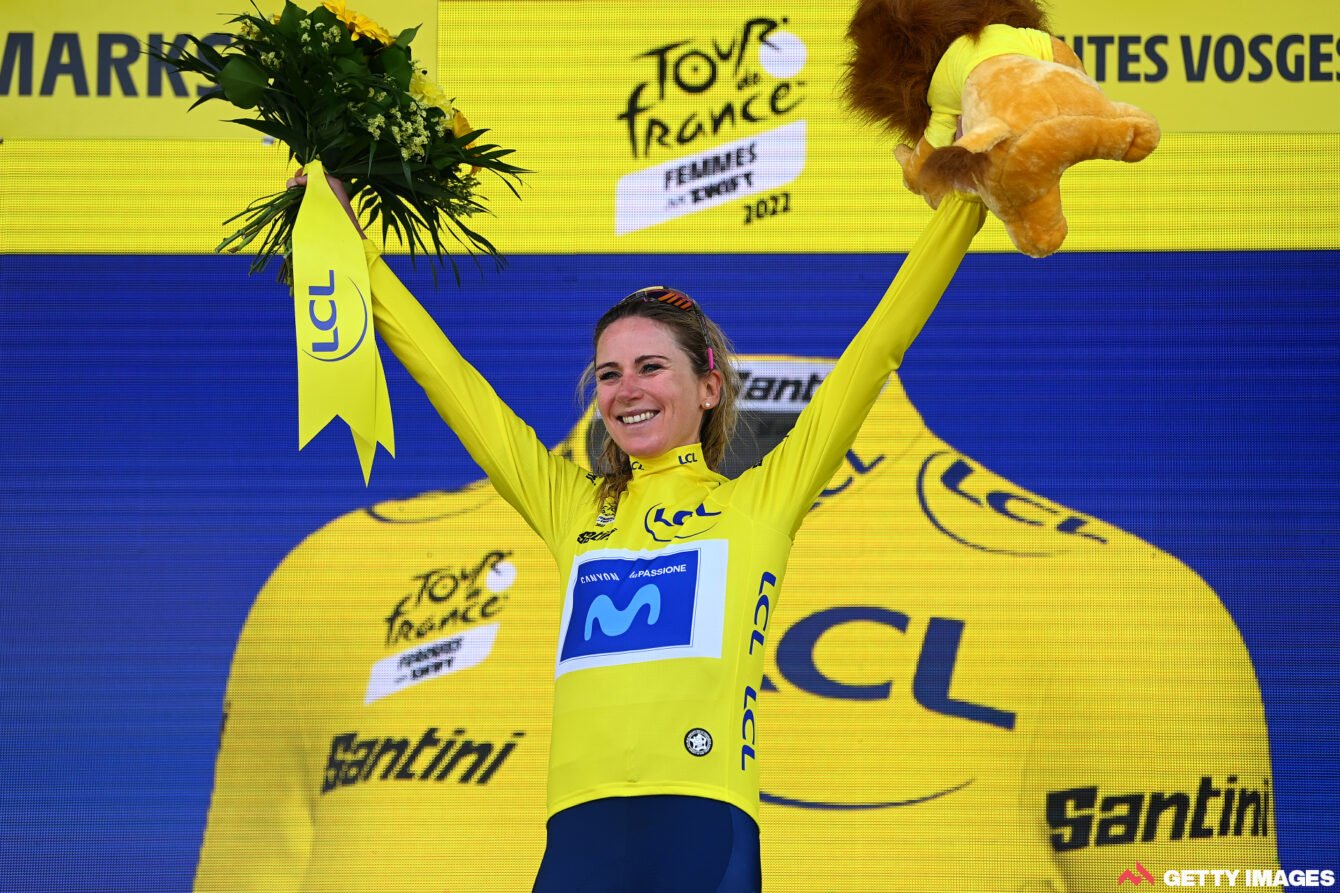 The GC race had barely begun before stage 7. Marianne Vos (Jumbo-Visma) was sitting in yellow on borrowed time before the mountains with the GC favourites dotted around the top 10. Just 2:34 separated Vos in first and Elise Chabbey (Canyon-SRAM) in 10th.

After Annemiek van Vleuten (Movistar) had her way in the Vosges Mountains, however, the GC was torn to pieces.

The 39-year-old’s 60 km-long assault on the GC race sees her leading by 3:14 ahead of her nearest rival, Demi Vollering (SD Worx0, who valiantly stuck with her compatriot until she could no longer match her pace on the climbs.

“That’s not normal,” Vollering said of Van Vleuten’s performance. “I said to her it’s not normal what you did. She said, I have so much more training experience and experience overall. She said to me that it will come to me, so let’s hope.”

Vollering stayed away on her own ahead of a chasing group of favourites to finish 5:16 ahead of Cecilie Uttrup Ludwig (FDJ Suez Futuroscope) who took third place on the stage. Vollering’s ride puts her at a 1:19 advantage over Kasia Niewiadoma (Canyon-SRAM) who started the day in second place.

“It was brutal to be honest,” said Niewiadoma after the stage. “There was seriously no time to recover, no time to do anything, because we started with a lot of attacks from different teams. So the pace was quite high. And then of course, we get the first climb. And it was still just crazy.

“For me personally, I knew that after the second climb, there was a long descent on the big road and the part in the valley was something that you definitely would benefit from when having riders around too. So when I saw [Elisa] Longo Borghini going on her own I knew that it would be a difficult day for her.

“And then on the last climb I just gave my best because I knew that the GC spot or the top three is available for me, especially the third place so basically I rode for that.”

Longo Borghini’s solo efforts meant that she struggled on the final climb after eventually being caught by the group containing Niewiadoma, Juliette Labous (DSM), Uttrup Ludwig, Evita Muzic (FDJ Suez Futuroscope), Urška Žigart (BikeExchange-Jayco), and Silvia Persico (Valcar Travel & Service). The Italian eventually crossed the line 7:23 behind Van Vleuten and 2:07 behind Uttrup Ludwig putting her in seven on GC at 6:15.

“I’m completely exhausted,” Longo Borghini said after the stage. “I’ve been alone for a long time. For me, what really killed me was the valley. I gave my best and that’s it. In the end if you give your best it’s all you can do, and I really did it.

“We all knew that she [Van Vleuten] was the strongest and I didn’t believe for one second that she was not good.

“For me I was rockclimbing the last climb, but what can I say? It’s bike racing.”

Uttrup Ludwig’s third place on the stage has moved the Danish rider up to fifth overall at 5:59. Despite climbing up the GC the 26-year-old seemed uncharacteristically deflated after the stage.

Labous, who finished fourth on the stage after a three-up sprint with Niewiadoma and Uttrup Ludwig has climbed to fourth overall at 5:22 while Muzic, who was in the same group going into the final climb, has entered the top 10 and sits in eighth with a deficit of 10:13 on Van Vleuten.

Italian multidisciplinary rider Silvia Persico beat Longo Borghini in a sprint over the line to come sixth on the stage but still lost time to move into sixth overall at 6:11 back. An in-the-wars Mavi Garcia (UAE Team ADQ) managed to pull up after an unfortunate few stages of crashing to ride to 13th on the stage which propelled her back into the top 10. She sits in ninth place overall, 12:06 behind Van Vleuten.

One of the day’s big GC losers was Vollering’s teammate, Ashleigh Moolman Pasio. Usually one of the peloton’s strongest climbers, the South African could only manage 18th on the stage, 13:43: behind Van Vleuten, dropping to 12th overall.

“I’ve had a bit of a runny nose and stuff but I thought it was just allergies, but my whole body was just aching today,” Moolman Pasio said. “I don’t know, empty today. It’s crazy how you can go from feeling so good to feeling so shit just overnight. But yeah, a really good performance from Demi so we can be happy with that.”

One of the revelations of the day was Žigart who, after a relatively quiet race, spent the day in a group of the peloton’s best climbers. The 25-year-old Slovenian finished the stage in eighth place but is over 30 minutes in arrears on GC.

“It was full gas from the start,” she said. “Already when the big break went. Actually when the peloton split. And then full gas into the full climb. Everybody knew that they had to make a difference as soon as possible and then it’s everybody on their own.

“I wasn’t there – I didn’t see it [Van Vleuten’s move]. I was a little bit stuck and out of position. I had to climb my way back to the group of favourites. We were unlucky to have Kristen [Faulkner] back but I couldn’t push, I couldn’t work in the group. Of course I was a little sad. I felt a bit stupid.

“I felt good [on the day]. I showed the world that I have the climbing legs. Hopefully in the future I can be further up.”

The GC podium seems all but secured with one stage to go, however in the words of Niewiadoma: “you never know what can happen. Bike racing is unpredictable.”