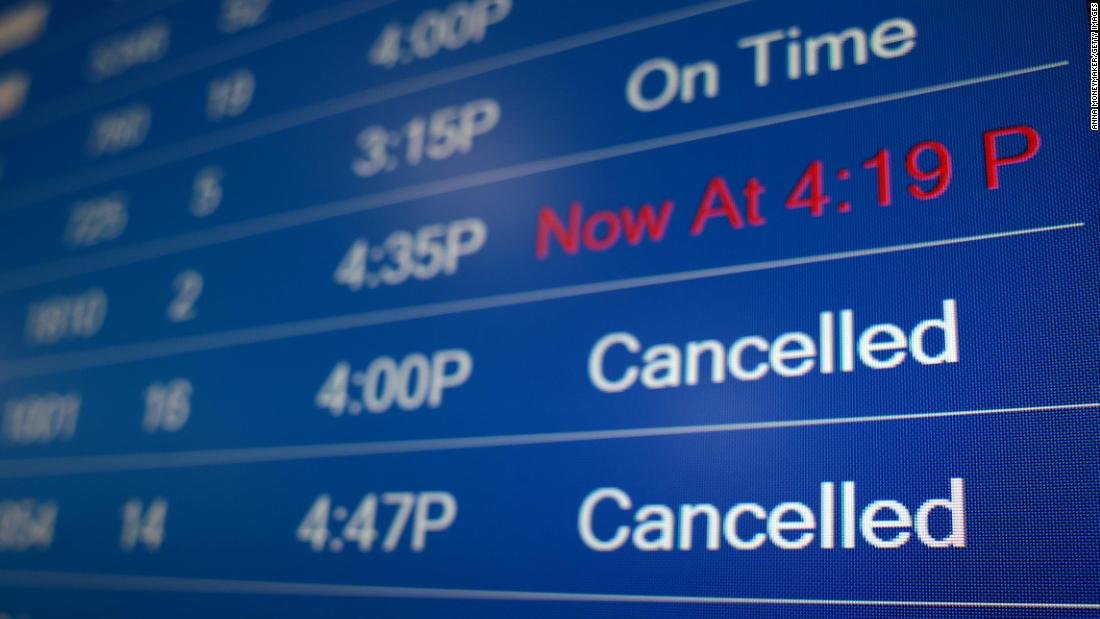 (CNN) — It has been a tough slog for some air travelers here at the winter holidays rush — and it may not be over soon.

Citing the spike in Omicron variant cases and in some cases bad weather, airlines have been canceling and delaying thousands of flights since December 23.

While most flights are still proceeding, what if you’re one of the unlucky passengers? Here are some tips to help travelers navigate the system when flights are delayed or canceled:

Avoid getting trapped at the airport

As bad as it is to find out your flight has been delayed for a long time, or worse, canceled, it’s better to find out from the comfort of home or a hotel room and make new arrangements from there.

“Check your flight status before you go the airport. Most of these notifications are not happening at the last minute,” said Scott Keyes, the founder of Scott’s Cheap Flights. “Save yourself the drive to the airport.”
Keyes told CNN Travel in an interview on Monday that you should sign up for airlines’ free text alerts on the status of flights when you buy your ticket. You should also download your carrier’s app.

You can also put your airline and flight number directly into a Google search bar to retrieve the status that way. That’s also handy for friends or family who are on standby to pick you up.

If you’re at the airport already

Sometimes, the delays and cancellations happen after you’ve arrived at the airport. Once the bad news has been delivered, what should you do?

Keyes said to head fast as you can to the airline agents’ desk — and get ready to multitask while you’re in line.

Fast is a key word here. “It’s going to make a difference who arrives first. It’s first-come, first-serve. Positioning yourself close to the desk can pay off,” Keyes said.

Then call up your carrier while you’re waiting. Depending on your spot in line, it might be faster to get through to a call center. “Whatever happens first, great,” he said.

Calls to US domestic numbers might have really long waits. Keyes suggested trying an international call center for your carrier instead.

“Most US-based travelers aren’t thinking to call the Canadian help line for Delta. You might get through to an agent much quicker. They can all handle your reservations just the same.”

You can also use a self-serve kiosk, American Airlines says. “Scan your boarding pass or enter your record locator to see your updated trip details. From there you can also switch your flight and print your new boarding passes.”

Passengers wait in line to check in for their flights at the Dulles International Airport in Dulles, Virginia, on Monday, December 27.

Whether you’re dealing with an agent in person or over the phone, how you approach things can make a big difference. That starts with attitude.

“Honey attracts more flies than vinegar,” Keyes said. “Look at this from the airline agents’ perspective. They’ve been dealing with irate customers really since the pandemic began. The agent is the one who has the most ability to help you.

“Asking nicely and sympathetically is far more likely to get what you want than being a jerk about it.”

He had another tip when it’s your turn to talk to an agent about making new arrangements: “Come prepared to offer your own options already. Doing your own research is absolutely helpful.”

Your agent can expedite things if you’ve already looked up new routes and possible suggestions while you’ve been waiting. Be ready to explain what you want.

If you’ve booked through Expedia or another third-party site, you’ll have to deal through them when there’s a cancellation.

If price is the same, Keyes suggested you book directly with the airline. In case something goes wrong, “it makes it much more complicated with multiple sets of policies” when you booked via a third party.

US PIRG, a consumer advocacy group, suggests you avoid layovers when booking if possible. The more times you stop, the more chances for something to go wrong.

The group also backs up the advice from Keyes to be nice and polite to agents but also says consumers should be persistent in trying to get the situation resolved satisfactorily.

Trapped for the night

A woman and child wait for their flight alongside another traveler at Miami International Airport on Monday, December 27.

What do you do if it looks like you’re not going to be able to fly out until the next day and you’re not in your home city?

“Ask the airline to put you up in a hotel or give you a hotel voucher. They might do it; they might not. It’s not required by law,” Keyes said.

They’re less likely to do it if it’s weather related, he said, than if the problem is a mechanical issue with the plane or staffing issues.

Get to know policies. For instance, Delta Air Lines says it will provide a hotel voucher in some circumstances if travel is interrupted for more than four hours after the scheduled departure time when the delay is between 10 p.m. to 6 a.m.

Whatever you do, at least ask, Keyes said. A voucher for hotels and even ground transport and meals aren’t likely to just be offered.

You should also look up your credit card information. Keyes said your card might have passenger protections, including free hotel rooms if you’re stranded and perhaps even cover your food and taxi to the hotel. Look up what do you need to do to get reimbursed.

If your flight is delayed instead of outright canceled, you might want to weigh whether to wait at the airport. Depending your personal circumstances, hunkering down there for five or six hours might be easier than going to and from a hotel. Also, Keyes said, check whether there is a hotel within the airport.

The Points Guy advises trying to get into an airport lounge if you can, where you can recharge your phone and rest more easily.

Cancel your trip and fly later

“If you are scheduled to fly in the next week and worried about Omicron, airlines are offering free changes to your flight,” Keyes said. “If you’d like to switch your travel dates, you can change without penalty.”

He also noted that if the new travel dates are cheaper, you can get a travel credit. (Conversely, you’ll pay more if the flight is more expensive.)

“By switching a flight from the holidays to February, you’re less likely to encounter this Omicron situation. You might save yourself a couple of hundred of bucks.”

Refund entitlements for your flight

The US Department of Transportation says you are entitled to a refund of your ticket cost because of a cancellation or “significant delay” and you choose not to travel.

This is the policy regardless of the reason the airlines cancels or delays the flight. However, what “significant delay” remains open to interpretation.