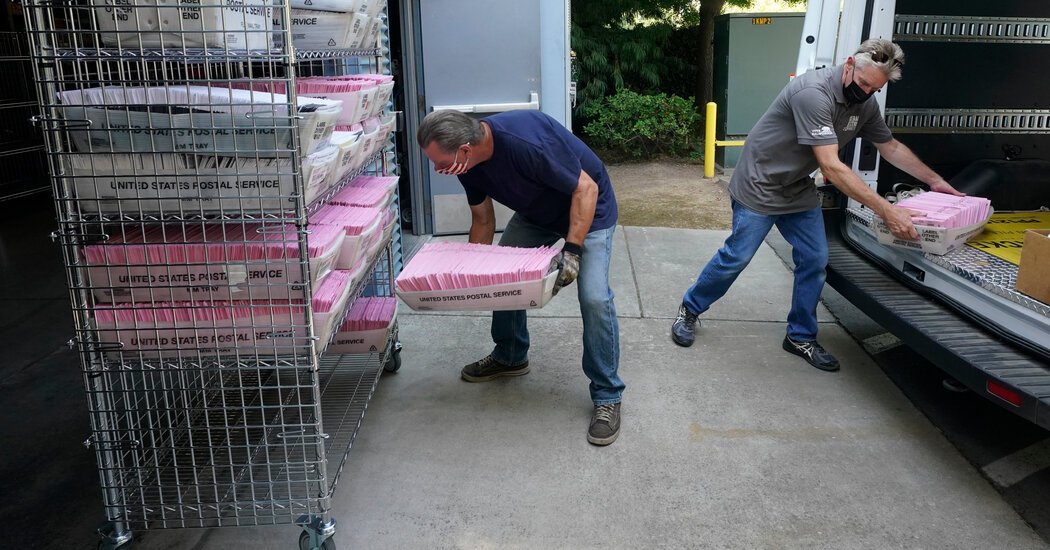 Unlike the sprawling forms Californians usually contend with in the voting booths, the ballots for the recall election of Gov. Gavin Newsom ask only two questions:

Should Newsom be recalled? And who should replace him?

But, if my inbox is any indication, the short ballot is far from simple.

I’ve gotten questions from opponents of the recall who want to know whether answering the second question will invalidate their “no” vote on the first (it won’t). Some Democrats are looking for guidance on choosing the least conservative Republican replacement, in case the recall succeeds. And many voters are befuddled as to why Newsom has been telling people to ignore the second question all together.

“The single greatest confusion of this election is what your rights are in participating in the replacement election,” Raphael Sonenshein, the executive director of the Pat Brown Institute for Public Affairs at California State University, Los Angeles, told me. “Voting should be simple, and this is not so simple.”

A tricky political calculus for Democrats

California’s peculiar recall laws dating back to 1911 shoulder most of the blame for this mess.

Recalls here are a two-step process: Voters decide whether to remove a candidate from office, and also who should be the replacement. (There are some states where the lieutenant governor automatically takes over for a recalled governor, but most states have voters select the replacement.)

What’s unusual about California’s law is that it requires both elections to happen on the same day, on the same ballot. And the incumbent, in this case Newsom, is barred from running in the replacement election.

So that leaves Democrats to negotiate a tricky political calculus: How do you endorse a replacement candidate when you don’t want the governor to be replaced at all?

Well, there’s Option A: Support a politically aligned Democrat in the replacement race and hope the candidate isn’t so popular that people vote to recall Newsom because they’d prefer the backup. Or, Option B: Ignore the second question and focus on the first.

The latter seems to be Newsom’s strategy. “One question. One answer. No on the recall. Move on. Send in the ballot,” the governor said recently.

In the 2003 recall election of another Democratic governor, Gray Davis, the party went the other route. Cruz Bustamante, the popular Democratic lieutenant governor, ran as a replacement candidate. Yet when Davis was ousted, he was replaced by Arnold Schwarzenegger, a Republican candidate.

Joshua Spivak, a senior fellow at Wagner College’s Hugh L. Carey Institute for Government Reform, said there’s no evidence that having a prominent candidate from your party on the replacement ballot increases your odds of staying in office. In other words, Newsom’s strategy may be the best way for him to win the recall.

Bustamante himself, who now runs a consulting firm, told The Los Angeles Times last month that he supported the party’s decision not to endorse a replacement. On his own ballot, he said, he left the second question blank.

The downside of leaving ballots blank

In a poll released Wednesday, 49 percent of likely voters said they either wouldn’t fill out the second question or didn’t know who to vote for. Some California newspapers that have endorsed voting against the recall have recommended leaving the second question blank, while others have urged the opposite.

I’ve gotten a handful of emails from people who said they wrote in Newsom’s name for the second question, even though they knew it wouldn’t count. They just didn’t know what else to do.

Jessica Levinson, who teaches election law at Loyola Law School in Los Angeles, said it was a “disaster” that members of the Democratic Party, who are supposed to be champions of voting rights, are advising people to leave parts of their ballots blank.

“Why would you say don’t even exercise your right to weigh in for who the next governor could be?” she said.

Levinson added that it was strategic for the Democratic Party not to endorse an alternative to Newsom. He will most likely run for governor again in 2022, she said, and it would be easier to win against a Republican, especially one who secured only a small fraction of votes in the recall election.

The rest of the news

In her latest newsletter, The Times’s California restaurant critic, Tejal Rao, shares panzanella recipes, which give a second life to stale bread.

Today’s travel tip comes from Mackenzie Skye, a reader who recommends visiting Mendocino, which she calls “truly one of the most beautiful places.”

Tell us about the best spots to visit in California. Email your suggestions to [email protected]. We’ll be sharing more in upcoming editions of the newsletter.

This week I finished reading “Breath: The New Science of a Lost Art” by the journalist James Nestor. It’s no easy feat to write about biology and medicine in a breezy, even funny way, but Nestor pulls it off.

And before you go, some good news

The Dapper Dans, the pinstripe-suit-clad, straw-hat-wearing, a cappella singing group, is returning to Disneyland on Friday.

The barbershop quartet is set to return to Main Street U.S.A. as part of the next phase of the park’s reopening, reports The Orange County Register.

The group had its first rehearsal last week after the pandemic kept it apart for 17 months. The Dans are prepping Halloween dance numbers and songs, plus a bonus.

Thanks for reading. I’ll be back on Tuesday. Enjoy your long weekend. — Soumya

Steven Moity and Miles McKinley contributed to California Today. You can reach the team at [email protected].

Sign up here to get this newsletter in your inbox.